Songs are still rattling around in my head as we leave Portobello behind. The route is now citified and rich in all the variety of the teeming city, the bars, cafes, shops and all the quirks and complexities of the teeming crowds. Alternative routes open like a braided river. Redbrick thoroughfares and sylvan boulevards, the steel and surge of mechanised transport and the otherworld tranquility of the Grand Canal. To saunter or to sprint, well, it depends on your mood.

And the blind man sings in Irish

He get his money in a tin dish

but once he could have made her

Kelly’s Corner is the name given to the junction of the South Circular and South Richmond Street. The Kelly’s premises which gave its name to the place has long gone. The junction was for long a complicated warren of narrow streets which was simplified in the 1980s. Old Camden Street was built over so that modern Camden Street could follow a direct line along Richmond Street heading south towards Rathmines. Part of the southern section remains. Even here, the decrepit old redbrick buildings are giving way to shiny modern constructions. 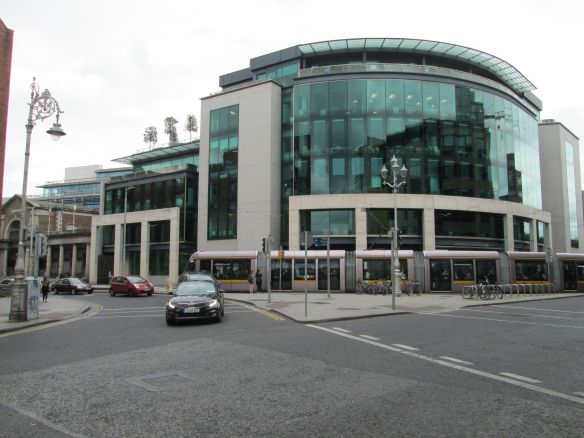 Meanwhile, the stretch of SCR east of Kelly’s Corner is named Harcourt Road and connects to the city centre hotspot of Harcourt Street. Back in 1858, the Harcourt Street Railway Line terminated here at the city’s edge. It was ceased a century later, thanks to the short-termism of Todd Andrews, Minister for Transport in the Fianna Fail government. This was the original link between Dublin and Bray and along the coast towards Wexford and Waterford. Much of the old line remained free of obstruction, and provided the basis of the Luas Green Line in 2004. Originally planned to run cross city, it was limited to connecting Sandyford in the South with St. Stephen’s Green; with Fianna Fail, coincidentally back in power, Minister Mary O’Rourke decided it would be too much trouble to push  a tramline through the gridlocked capital. Over a decade later a more enlightened regime pushed on with the original cross-city plan and the line was extended through the city and on past Phibsboro to Broombridge on the Northside.

Harcourt Street Station was completed in 1859. Designed by English architect, George Wilkinson, its frontage features two colonnades each side of a tall central arch. A century later the line was abandoned and the building fell into disuse. The coming of the Luas line brought redemption, and the station has been converted to a bistro, the Odeon. The front colonnade provides an elegant terrace where one can mull over a drink between trams. With a tram every ten minutes there’s little pressure to hurry your drink, there’ll be another along soon enough.

A man walks down the street,

It’s a street in a strange world,

Maybe it’s the first time around.

Harcourt Street itself hosts a number of raucous nightspots. Behind the serene curved Georgian facade beats the hectic heart of Dublin nightlife. Dicey’s, the Jackson Court and Copper Face Jacks are among its well sung spots. The latter club is curiously magnetic for the rural reveller, living something of the ex-pat life in the capital.

He looks around, around

He sees angels in the architecture,

He says Amen, and Hallelujah!

(You Can Call Me Al, Paul Simon)

The original Copper-faced Jack was John Scott, 1st Earl Of Clonmel who lived on Harcourt Street. Scott’s nickname was either a direct reference to his unusually dark complexion  or to his aggressive, hard faced argument. He was appointed Attorney General and though a determined reactionary, supported Catholic relief acts. He fell into ridicule in his later years, after a bitter feud with John Magee, proprietor of the Dublin Evening News. Scott lumbered Magee with an astronomical fine in a libel dispute, causing the newspaperman to be jailed. When Parliament found for Magee, he  acquired land adjoining Scott’s property and advertised a monthly pig-hunt, attracting thousands and ruining Scott’s property. He died in 1798 at age sixty.

In 1778, Scott had built the first house on Harcourt Street at No. 17. He was a friend of the notorious Buck Whaley whose house at St Stephen’s Green backed onto Leeson’s Fields, called after the Leeson family who developed property hereabouts in the mid seventeenth century. Scott bought eleven acres for his private gardens of Clonmel House. It required a subterranean passage under Harcourt Street to connect to Clonmel House. In 1817 the lands were made public and named the Coburg Gardens. Fashionable for a number of decades, they featured grand evening shows, commemorating Waterloo and celebrating the coronation of William IV. They fell into ruin later in the century however, and were bought by Benjamin Guinness.

Guinness determined to develop the site as a recreational garden in the Victorian style incorporating  an exhibition palace and concert hall. Scottish gardener and landscape architect Ninian Niven was employed to design the gardens and Irish architect Alfred Jones the buildings. The complex opened in 1865 as the Dublin Exhibition Palace and Winter Gardens The Great Exhibition of 1865 attracted almost a million people. Public events continued for a number of years, however in 1883 they reverted to the private gardens of the Guinness’s Iveagh House. Annexed to the University in 1941, they came under state care in 1991, and have been restored to some of their original splendour. The Iveagh Gardens are very much Dublin’s hidden gardens, for long ruined and forgotten in the shadow of UCD Earlsfort Terrace.

Less forgotten than before, but still off the beaten track, they offer lovers and loners the tranquility of solitude. There are hectic peaks, with rock gigs hosted in high season, though in a quieter corner, John McCormack is permanently poised to sing. The park radiates an eerie, gothic ambience off season. Its central fountains are particularly entrancing, their elegant stone angels holding water-bearing discs aloft. Elegant and ethereal, it’s a place to sit and pray, to whatever deity might hear.

The austere neo-classical building facing Earlsfort Terrace was acquired by University College Dublin as their main building in 1908. UCD had originated as Dublin’s Catholic college, in opposition to Protestant Trinity College. From the early sixties, UCD began relocating to the huge Belfield campus in D4 and Earlsfort Terrace was converted into the National Concert Hall. Dublin never had a dedicated Opera House, so this, I suppose, will do. Classical, Opera and Jazz all feature, with summer outdoor recitals in the Iveagh Gardens. 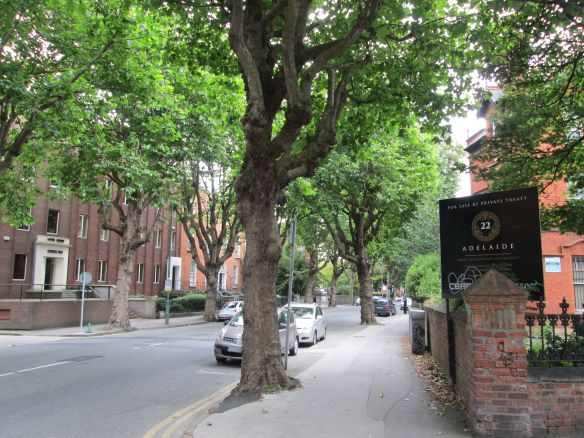 After Harcourt Road we merge onto tree lined Adelaide Road. On the city side of the street is the Royal Victoria Eye and Ear Hospital. This is a public teaching hospital founded in 1897, amalgamating two hospitals, one of which was founded by SIr William Wilde, Oscar’s father. Designed by Carroll and Batchelor in an English Baroque, or Queen Anne, Revival, style, it has an attractive, extensive, redbrick facade of three storeys capped by a mansard roof. I had to visit once, having been slashed in the eye by a maniac wielding a copy of the Irish Times. It will take too long to explain. The treatment was prompt and good, though a week with an eyepatch soon grows tiresome with wags enquiring, hey, Long John, where’s your parrot?

Just past the hospital, we arrive at the junction with Leeson Street. The Leeson Street Strip was for long the city’s principal clubland, from the city centre on south towards Donnybrook. Its a bit more discreet than Harcourt Street and home to such haunts as the Sugar Club and Leggs. The restaurant Suesey Street namechecks the street’s original name.

Fitzwilliam Street is a long expanse of, mostly, intact Georgian architecture. Laid out in the 1760s it descends slowly and arrow straight from Leeson Street to Holles Street, the National Maternity Hospital bracketing its souther end. On the way are two sylvan squares. The small garden square of Fitzwilliam, and the large public gardens of Merrion Square. Irelands Government Buildings, Leinster House, home of the Dail (Parliament) and the National Gallery are on the western side. One of Dublin’s iconic vistas is on the East, the view to the Pepper Canister Church forming the culmination of the vista along Mount Street. This was designed by John Bowden and Joseph Welland, its slim white tower with cupola suggesting its nickname. Officially named St. Stephen’s Church, it has served its Church of Ireland congregation since the 1820s.

The Grand Canal, meanwhile, offers a scenic route. From Leeson Street bridge to Baggot Street, Wilton Terrace has high office blocks to the north, hardly noticeable while strolling along the sylvan serenity of this stretch of Canal. The area was much haunted by the poet Patrick Kavanagh. The man from Iniskeen used to lounge on a bench by Baggot Street, absorbing the life and leaf of the canal, emanating poetry. He is commemorated here, not once but twice. The original bench in his honour is situated at the lock, erected by friends shortly after his death in 1968. Another more recent has a fine statue of the poet in gangly repose on one end of the bench. Sit with him and drift, float on the still waters for ever and ever.

On Raglan Road on an Autumn Day,

I saw her first and knew,

That her dark hair would weave a snare

That I may one day rue.

On Raglan Road is a famous evocation of love and loss, located on that road in nearby Ballsbridge. It has been set to music, derived from a seventeenth century air by harpist Thomas Connellan, translated as The Dawning of the Day. It has been much covered by a host of artists, Irish and international. Luke Kelly’s is the most resonant, and he generated the song with Kavanagh, but listen also for Joan Osborne, Van Morrison and DIre Straits.

I saw the danger, yet I walked

Along the enchanted way,

And I said let grief be a falling leaf

At the dawning of the day.