The clock winds down. From eleven to twelve marks the last hour of the day, the last month of the year. It’s been a long day spent circling Dublin. It has taken about a year to write, often revisiting, refining the reflections harvested on that first sweep. I stroll the Grand Canal again between Luas Line and Dartline in that long Indian Summer just gone. Things change in a year. New buildings rise, old ones fall. The tallest building along the canal, Fitzwilton House, a thirteen story skeletal tower from the sixties, was demolished in October. Meanwhile, the eastern extreme of the canal sees taller buildings growing taller by the year.

A friend once lent me the quote: to the young man the city is old, but to the old man it is young. If I’m not quite the tattered man upon a stick, the rising city of stone and glass is gleamingly new. But the city is always organic: stone, steel and glass, flesh and blood, individual and somehow collective, creating and devouring itself in time.

I am the man walking in impossible slow motion through the surging river of commuters. The song I sing is both aching and exultant.

Look at me standing

Here on my own again

Up straight in the sunshine

To make me happy

Not stand here on my own

No need to run and hide

No need to hide and cry 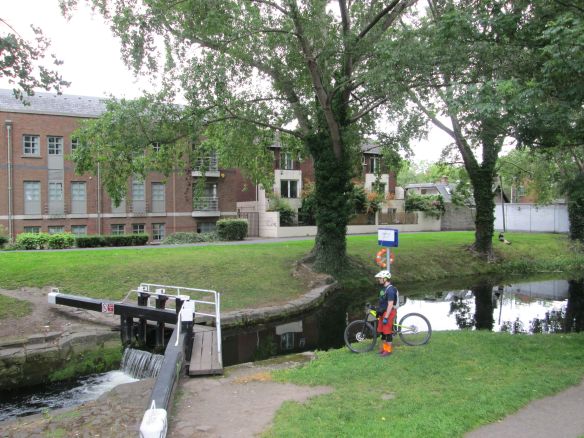 After Baggot Street bridge, the Canal enters a quiet stretch. The main thoroughfare has drifted away from the waterside, off towards Beggar’s Bush. Walkers, joggers and wading birds stroll the towpath, enjoying calm water and the shade of trees. Across the canal modern apartments and restaurants stand close to the waterside. Here, on the north bank, Georgian terraces line the road as far as the Pepper Canister Church. We view it from the back where it seems somehow remote from the city centre. Mount Street Upper flows quietly around the church’s island. As Mount Street Crescent it slips across a modest bridge to exit the city.

Farther on, Mount Street Lower is a broad city thoroughfare of redbrick Georgian terraces. Broad and somewhat dour with a stern business profile. Modern offices line the route to Grand Canal Street. Beyond, the highrise South Docks is growing again after the hiatus of the economic crash of 2008.

O commemorate me where there is water,

Greeny at the heart of summer. Brother

Where by a lock Niagarously roars

The falls for those who sit in the tremendous silence

The towpath ends as the canal burrows into the once industrial docklands. To the right, the road heads into Dublin 4. High Temple of this fabled locale is the football stadium at Lansdowne Road. Revamped spectacularly at the turn of the century, it forms a giant glass cake to celebrate the new era. Its northern periphery bows respectfully to Havelock Square as citizens of this city of a million people don’t expect to be overshadowed by tall buildings. The effect is somehow quaint, incongruous as the old Mock-Tudor pitchside clubhouse swept away in the modernisations.

The home of Irish Rugby is currently witnessing a golden age. My father took me to internationals back when pickings were slim, and players less so. They were the days of Tom Kiernan, Mike Gibson and Willie John McBride. Then there was that enigmatic all rounder, A.N. Other, who somehow could never make it onto the field, despite regular programme promises.

It is soccer’s adoptive home also, hosting internationals from the mid seventies replacing decrepit Dalymount. Nearby the docks gave birth to Shelbourne and Shamrock Rovers. Shelbourne were formed in 1895 and originally played in Havelock Square now in the shadow of the stadium. In 1906 they became the first team outside of Ulster to win the Irish Cup, beating Belfast Celtic in the final. In 1921, during the War of Independence, Shelbourne were refused a home replay having drawn a cup match against Glentoran in Belfast. Along with Bohemians and St. James’s Gate they broke away to form the FAI. The associations have, almost uniquely in Irish sport, remained separate ever since. Neither Shelbourne nor Shamrock Rovers have lingered in these parts. Rovers followed the Dodder River to Tallaght via Milltown. Shelbourne moved North of the river, playing out of Tolka Park in Drumcondra.

We hang a left which brings us townwards. A few yards on is Sir Patrick Dun’s Hospital. Patrick Dun was born in Scotland but lived his professional life in Ireland. He accompanied William of Orange to the Battle of the Boyne and was elected to the House of Commons in 1692. When he died in 1714, he left lands in trust to the Royal College of Physicians. The estate proved more prosperous than anticipated and by the end of the eighteenth century the College determined to start a teaching hospital. The hospital was founded and named in his honour a century later. Closing in the 1980s, it is now used for civil marriage ceremonies. A copy of the painting Meeting on the Turret Stairs by Frederic Burton presides over couples being wed. Romantic perhaps, though the last embrace of Hellelil and Hildebrand is something of a cautionary tale of doomed love. The building was designed by Richard Morrison and completed in 1808, Its granite neo classical facade looking rather grand in the utilitarian environs of Grand Canal Street.

Across the road the Treasury Building is an impressive modern structure on the site of Boland’s Bakery, founded 1874. Boland’s was occupied by a group of rebels led by Eamon De Valera during the 1916 Rising. De Valera was captured and sentenced to death but thanks to his American birth and a global outcry over the previous fifteen executions, he dodged the bullet. Dev was president of the revolutionary parliament, the first Dail. When Fianna Fail secured a majority in the 1932 election, he assumed leadership of the country in a peaceful transition from Ireland’s first independent leader, WT Cosgrave. Architect Sam Stephenson, notorious and controversial modernist, designed a factory on the site in 1951. This in turn was rejigged as the Treasury Building twenty years ago, Stephenson’s skeletal frame clad in more glistening postmodern raiment. It recently housed NAMA, the Bad Bank, with Google poised to pounce. 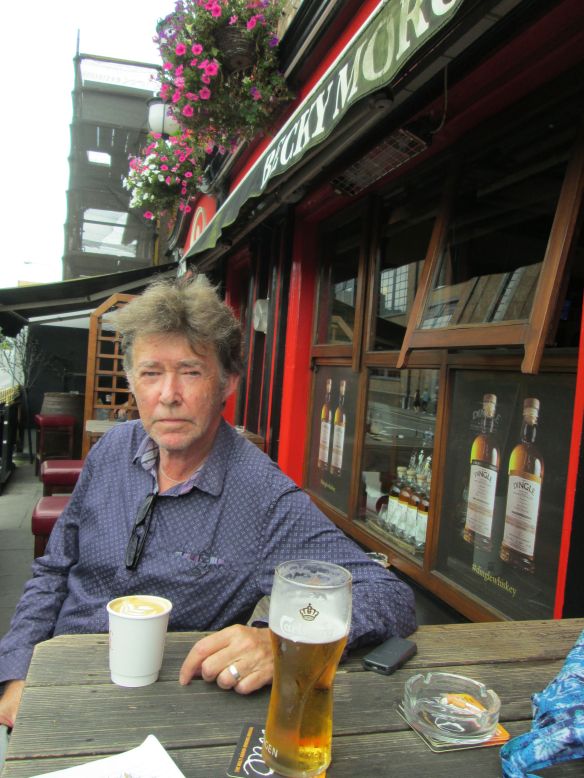 Becky Morgan’s is an attractive watering hole, its cheerful floral exterior a welcome relief from the dour environs; very much the oasis in the desert. The front porch is perfect for a pint and a lungful of robust city air. The pub faces down Macken Street, slicing through an industrial nineteenth century landscape to the city quays. Tall folk like us must crawl beneath the impossibly low railway bridge before the city emerges again in all its towering crystals. At Pearse Street, a right turn leads to Grand Canal Dock where Dublin’s most modern development is concentrated. 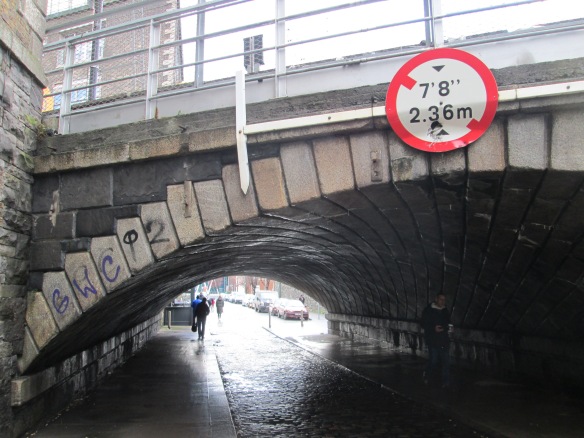 These Docks were first developed in 1796 connecting the sea port with the inland waterways. By the middle of the nineteenth century the immense project had been superseded by the railways. Milling, baking and some other industry persisted, but by the middle of the twentieth century the area was largely derelict and poised for redevelopment in the 1980s. In its heydey, the area was Danteesque: mountains of black coal for the Dublin Gas Company, tar pits and scrap yards. Bottle factories, iron foundries and chemical factories pumping out fumes and noise. The Gasometer rose two hundred and fifty feet (82m) above the inferno, forming Dublin’s major landmark for sixty years from1934. It was constructed in Nazi Germany and stood at the junction of Macken Street and the quays.

This doomed dockland formed the gritty backdrop for many a 1980s rock video. U2 in particular, ensconced in their studios at Windmill Lane, slummed their way into a new rock chique. Regeneration began in earnest in 1990 with a major decontamination project on the old gasworks site. Today the name Silicon Docks has been applied, referring to the concentration of high tech companies such as Google and Facebook.

Google occupy the Montevetro Building which at sixty seven metres is Dublin’s tallest building, for now. Its stripey spine nails the southeastern corner of the Dock. To stand on MacMahon Bridge is to stand on the cusp of time. The first bridge here was built in 1791 and known as the Brunswick Bascule. There have been five bridges in all, the first four being drawbridges of one sort or other. The current structure of 2007 is a handsome cantiliver fixed span bridge. Though fixed, I like to imagine it as a drawbridge, each raising like the blink of an eye. The concrete tower of Bolands Mills shimmers one afternoon and a glass tower rises from its own reflection to take its place. The Gasometer tilts and disappears, smoke funnels implode, the red gasometer is stripped to its skeleton to grow new flesh of glass apartments. Against a gale from Irishtown, I cup my hands to protect the flame, and looking up see the world rebuilt anew.

I got sunshine in a bag

I’m useless but not for long

The future is coming on

I hike the few yards to the foot of the Millenium Tower at Charlotte’s Quay, blow froth from a beer while Viking ships cruise mirthfully by. Tourists aboard the amphibian keep their eyes peeled lest Bono or the Edge take their smokebreak on the quayside. Meanwhile I preside, in poncho and sombrero, squint into the winter sun and exhale. Across the pond, the Bord Gais Theatre crystallises behind a plaza of neon pines. Designed by Daniel Liebeskind the theatre opened in 2010 and is Ireland’s largest with over two thousand fixed seats. It hosts top West End shows such as The Lion King, Miss Saigon and Chitty Chitty Bang Bang. International and local music and dance also feature, most appropriately for this location the like of Swan Lake by the Russian State Ballet and those great Scots; The Waterboys.

were born to be sanctified by you and me, 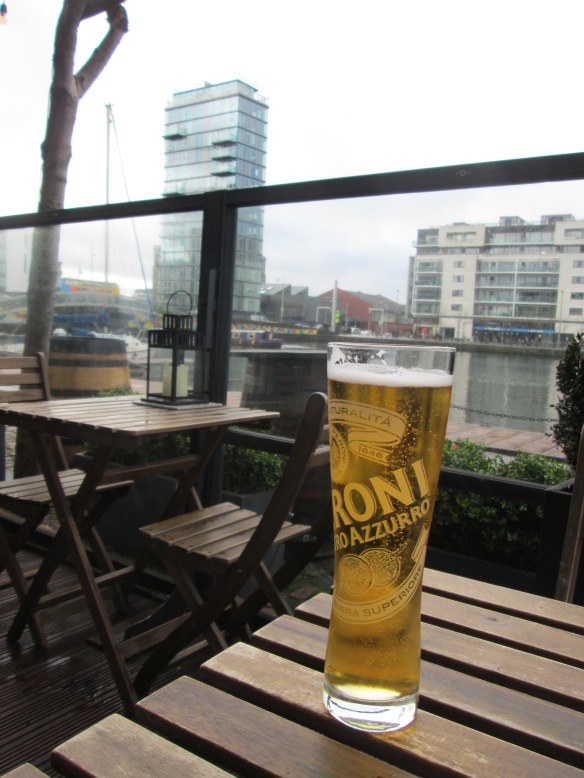 Sneaking along the side of the Theatre, Misery Hill leads back to Macken Street and the end of our journey. The Beckett Bridge lies lyre-like across the Liffey, suggesting a million tunes to play. The circle is complete. Riverrun, past Eve and Adam’s, from swerve of shore to bend of bay, brings us by a commodious vicus of circulation back to where we began.

I sit down to write on the eve of my birthday. The end of November, the eleventh month, and the end of the eleventh hour. I was born at the top of Dublin’s premier street, O‘Connell Street, in Dublin’s first established maternity hospital, The Rotunda. The name is sympathetic, is it not? To that most essential condition, to our circular journey. And it was there, just before midnight, in front of a blazing turf fire, my mother gave birth to me. So the story goes.

Here I go out to sea again

The sunshine fills my hair

And dreams hang in the air.

No need to run and hide

No need to hide and cry