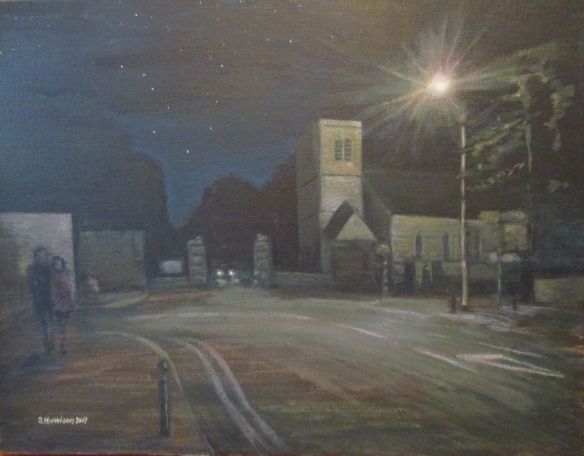 This is my most recent painting, done over December just passed. It is a view of Celbridge, looking north towards Castletown Hose, the view centered on Christ Church and the estate entrance gates. It is around midnight, and some stragglers linger as the town’s nightlife disperses homewards. The stars are out, and for all the quiet of the country, there’s a certain timeless magic in the air. And all the ghosts that ever passed this way.

Celbridge lies on the River Liffey in County Kildare. The name, a pidginised Anglo-Gaelic, means church by the bridge. It was previously called by the phonetic version of the original Gaelic, Kildrought, from Cill Droichead.

These days, it skirts the outer edge of Dublin’s conurbation. Its most famous son is Arthur Guinness, born here in 1725, who established his brewery in 1759. The rest is history, though a lot of it rather hazy. A statue of the great man stands on Main Street.

Despite the ever growing population, with more than twenty thousand people calling it home, a village atmosphere still pervades at its centre. There are several good pubs and a few eateries from the Liffey bridge and along the Main Street. The lands of Castletown estate have now been divided between public parkland and suburbia.

Christ Church marks the end of Main Street, just within the gates of Castletown House. Lady of the manor, Louisa Connolly, funded the building for the Church of Ireland community. It’s an attractive, if stern structure dating from 1813. It was extensively remodelled in 1883 as the original had fallen into ruin. The tower over the western entrance is imposing, its Normanesque style lends the view an antique quality.

The long tree lined driveway heading due north leads to Castletown House, a glorious Palladian Palace built for William, the Speaker, Connolly in 1722. He was the Speaker of the Irish House of commons, the most powerful elected position in Ireland. The Palladian style was in vogue, with all things Italian, in the early days of Neo-Classicism. Connolly employed leading Italian architect Alessandro Galilei and Irish architect Edward Lovett Pearce to achieve one of Ireland’s most dramatic stately homes. It is open to the public and the focus for weekend craft fair and the promenade of visitor and local throughout the year. 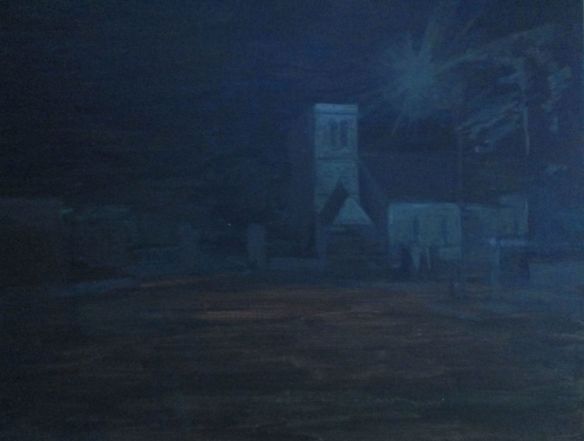