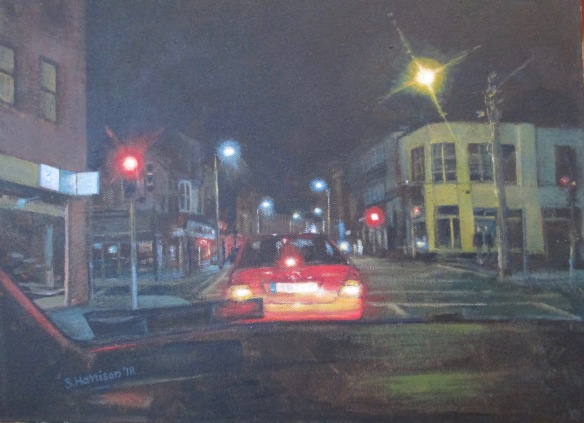 Bray, as a definite built location was established by the Normans under Richard de Clare (Strongbow) in 1169 on lands granted to Walter De Riddlesford. It guarded the fording point of the River Dargle where the town bridge now stands. The location marked the southern extent of the Pale, the area of Norman influence around Dublin. As such, Bray was a frontier fortress, sporadically attacked by native clans from the south: the Byrnes and O”Tooles. The castle was built on the high south bank of the river, but little remains beyond its vague footprint. Stone steps cut into the rock descending to the river are still visible. St Paul’s Church was established to the front of the fortification, the current building dating to 1609 is Bray’s oldest. The manorial village grew along Main Street heading south towards the Kilruddery estate of De Riddleford, now owned by the Earl of Meath, head of the Brabazon family.

This view of Bray looks south along the rising Main Street. The Town Hall at the far end is hidden by the bend in the road. The bridge is directly behind us with St Paul’s and the castle behind us to the right. The Royal Hotel, originally Quin’s, one of Ireland’s oldest rural inns and the courthouse of 1841 are just behind us to the left. Ahead, to the left at the traffic lights, Quinsboro Road leads down to the seafront. The white Art Deco building to the right was once the local office of Dublin Gas but is now vacant. On the left a few doors up, the fluorescent lights signal The Florentine, a pub once known as the Olde Bray Inn. And this is indeed the old centre of Bray, dating back to days long before the coming of the railway in the 1850s.

On this spot, almost eight hundred and fifty years ago, you would be leaving the relative security of Bray’s fortifications behind and heading into the untamed lands of the O”Byrnes of Cuala. You would now be “Beyond the Pale”. On a late Autumn night in 2018, I am heading home to my castle, just over a mile due south, near the brow of a hill where an ancient Celtic cross is planted. Sometimes you can blink and the accretions of history fade. Blink again and the security of neon and petrol return, familiar enough to embrace in the dark.